See how I made this website. View my source code

Photo by Mike Enerio on Unsplash

New Year's Resolutions going up in smoke? Try habits instead

It’s February - which, by now, is usually the point in the year where I realise I’ve already failed most of my New Year’s Resolutions. This year though, I’ve approached things a little differently. I’ve swapped my goals for habits.

Disclaimer: If they’re working for you, then don’t let me - or anyone else - tell you otherwise. Keep doing what works for you. For others, who like me feel pretty uninspired by New Years Resolutions, taking a different approach can be really helpful.

Action, like life, is available only in the present moment.

A lot of these issues you could chalk up to mindset, or honestly not being very good at setting goals and coming up with action plans. But that’s kind of my point. Right now, resolutions really aren’t serving me - someone who doesn’t have a perfect mindset, or unfailable motivation - a regular human being.

Trying out an alternative: habits

Firstly, I needed a bit of a kick up the butt: I was in the coaching section of some management training at work, with one of my colleagues practising coaching me. I was talking about how I wasn’t really doing the things that I knew were good for me, and I was struggling to make any routines or plans stick. I told him how the previous year I’d tied all of my habits and routines to locations in my house, and when I went to stay at my parents’ for Christmas, they’d all gone out of the window. He had me come up with some options for different things I could try, and ultimately gave me the social accountability to get started the next day (which conveniently, was one of my non-working Wednesdays).

At that point in time, I had two things in mind. I wanted to get back into cycling, ideally at least once a week, and I wanted to finish the book I was reading by the end of the year. I divided the number of pages I had to read by the number of days left in the year, and got a number a little over 6. I rounded it up to reading 7 pages per day, to give myself a little bit of a buffer. That became my starting point: one daily and one weekly habit that I wanted to build. I didn’t want to add any more to it than that. By starting small, I kept things as achievable as possible while building my habits. Finding time in the day for the 15 minutes it takes read 7 pages, or an extra hour and a half in the week to get out on my bike felt really achievable.

That became my starting point: one daily and one weekly habit that I want to build

I remembered seeing online about a habit tracking system where there was a stencil to draw out a set of tick-boxes for the week. I was inspired largely by that memory for how to track my habits. I also want to keep the tracking physical, rather than digital, and avoid looking at anything gamified like streaks or percentages. I find it really demotivating when I break them.

I remembered I have a strange little notebook that a friend gave me. Each two-page-spread in this book has a picture on the left page, and only twelve lines on the right (the top half is blank - I’ll get to this later). I’d struggled previously to think of a use for it, until I realised it is perfect for tracking my habits.

Finally, in order to give this change the greatest chance at success, I started right away, on the last day of November, when I could so easily have set it as a New Year’s Resolution and put it off until January.

My process for building habits

Every week, first thing on a Monday morning, I sit down with my book and lay out the habits I’d like to focus on building this week.

Along the top line, I leave a space, then add in the weekday initials “M T W T F S S”. On the remaining lines, there’s room for up to eleven habits - one of the main benefits of using this little book. I don’t want to overcommit myself and try to do too many things at once. I write the name of the habit on the left, and then draw in a little box to tick under each of the day headings. 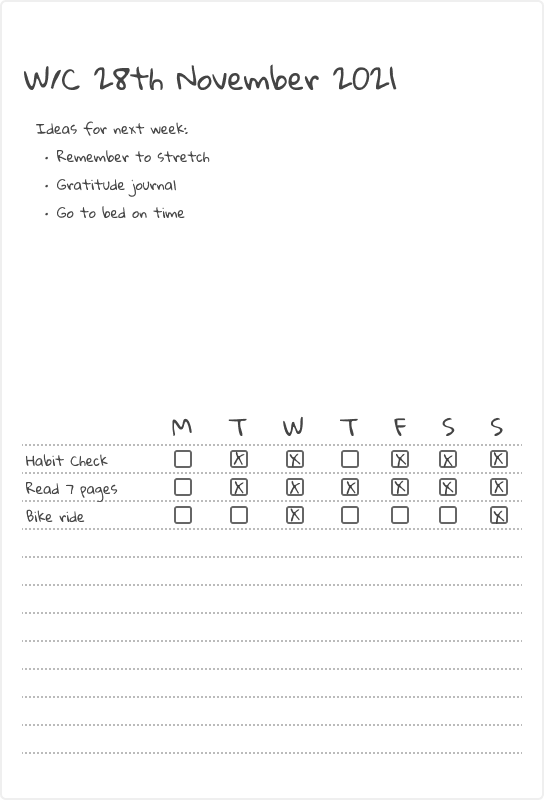 The first habit I always put down is “habit check”. This is really important for me, because ultimately the most important habit I want to build is the habit of consciously working on my habits. Simply the act of opening that book and looking at the things I intend to do in the day earns me one ticked item - a little victory to start the day.

When choosing the rest of my habits, I try to choose a range of frequencies. There are a few habits that I do try to do every day, initially this was reading 7 pages of Dune, pretty soon I added in daily gratitude journaling. Others, like cycling, I’m aiming to do 1-2 times a week, no more. The idea isn’t to practice every single habit every single day. The idea is that on any given day, there are a couple of items I can tick off from my habits and, ideally, every habit on the list would be ticked off at least once in the week.

Once I’ve written it out, the habits are locked in for the week, and I’ll see how I do. I make a point not to add or remove habits during the week, and there’s space on the page to jot down any changes I’d like to make or ideas for new habits I’d like to begin building the following week. I don’t plan further ahead by writing-out future weeks either. A week feels like a good timeframe to plan for, and then I work on executing that plan, one week at a time.

During the week, I can look at what habits need my attention more and adjust my focus. It’s also helpful to see what I’ve done this week already, and how many times, especially for those habits that I aim to do 2 or 3 times a week.

At the end of the week I can reflect on how it went, look for opportunities for improvement, and check in on the ideas and notes that I’ve put down. I can celebrate the success of what went well, and seek to understand the areas that didn’t go so well.

Finally, at the start of each new week, I turn over a new leaf, literally. I turn a page in the book, I can carry my learnings forward but ultimately I get a clean slate on which to form a new plan. Each week I will try my best to build the habits I set out, learning and gathering new insights as I go. Once I’ve moved the bookmark I don’t look back, I don’t count up streaks, I don’t get bogged down in what I have or haven’t done. I focus on the present, the current week, and what I can do to make a difference.

Self reflection is definitely a good thing. It’s an important aspect of personal development. Reflecting back on the year as a whole as opposed to individual situations definitely has its merit too. Taking a step back and looking at how far you’ve come. Celebrating overall achievements. Or taking stock of the things you didn’t do last year, or wish you’d approached differently. New Year’s Resolutions provide this for a lot of people.

There’s nothing stopping me from reflecting annually as well as focusing on weekly habits.

I don’t really have a rebuttal to this point. I’m intentionally keeping my focus narrow and on the small changes I can make right now. There’s nothing stopping me from reflecting annually as well as focusing on weekly habits. I do like to use World Mental Health day as an opportunity to reflect on (unsurprisingly) my mental health, and think about where I was along my journey on that same day the years before. It’s nice to look back and see how far I’ve come.

While I haven’t gone through it all yet, I really like the look of The Year Compass. It’s a tool you can use to reflect at the end of the year (or whenever, really) and set intentions for the year ahead in a structured and insightful way. I will likely go through this exercise once I’ve got a printer sorted for my home office.

Thoughts from other on a similar topic

I love this post from Cynyassy on instagram, that talks about setting New Years Practices instead of Resolutions. It addresses the idea around “falling at the first hurdle” and how practising something has a different mindset where you keep trying and slowly get better at it as you put in the effort.

I really like this write-up by Caitlin Taylor’s article on setting habits for New Year’s instead of Resolutions which I wish I’d read back when it was originally published.

Mark Manson’s provocatively titled Your Goals Are Overrated. I found it after deciding upon my own approach, but particularly like the section on Goals vs Habits, it also has some really good advice on some specific areas to build habits in.

Finally, no post talking about habits would be complete without some mention of Atomic Habits by James Clear. I’ve not read it myself, but a couple of friends whose opinions on books I respect have read it and highly rated it.

It’s February, and I’m still doing the things I need to look after myself, possibly better than I ever have. My Wednesdays have a renewed sense of purpose, and I’ve rekindled hobbies I’d long neglected. It’s anecdotal, and I’m sure there are plenty of other factors at play. But right now, this new approach to habits, and ultimately to looking after myself, is really working for me.

I’ve excitedly told enough friends and colleagues about my little book of habits and how it’s helping me that I felt inspired to write about it. I hope that by sharing it with a wider audience I can find a few other people out there who will find it helpful too.

I’m definitely not swearing off goals all-together. I may well start setting them for myself again in the future. But right now I’m happy without them, focusing on the present, building my habits, and looking after myself.